It’s Christmas Eve.  I think this is the latest I’ve ever waited to post about the official White House Christmas Card since Istarted posting a picture of the card in 2006.

Over the last couple of years it has been more difficult than usual to find a mention of the card, but this year I’ve actually dreaded writing about it.   No, I’m not bored with the process.   I still think the whole history of the official White House Christmas Cards is an interesting topic.   I like to see the particular cards sent by each administration, how the artwork was chosen, who the artist might happen to be…..I love the whole idea of the card…..but the controversies over the last year are getting old.

Some folks think particular cards fall too far on the side of Christianity with Bible verses, etc. while other folks get upset because the card might lack even a hint that it’s a Christmas card.

There appears to be no happy medium.

This year the card features a view of the White House Library with President Obama’s dog, Bo, sleeping by the fireplace.  The inside of the card reads, “From our family to yours, may your holidays shine with the light of the season.”    The presidential seal is also included inside the card. 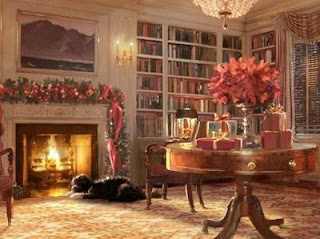 The artwork for the card was produced by Mark Matuszak, an artist from Los Angeles, California.  In an interview published by The Times, Matuszak said the White House asked him for “something home related”.   He produced the artwork and then used Photoshop to insert the Obama’s dog into the scene.

I actually like this scene since this is not a White House view that has been used in the past.  It also uses a piece of White House artwork which is another interest of mine.   The painting by Georgia O’Keeffe from 1930 titled Mountain at Bear Lake – Taos hangs in the library over the fireplace.  The lovely table featured in the scene is loaded with wrapped presents beneath a huge red poinsettia.

There are no laws or protocol governing the cards other than tradition.  The First Lady’s office works on the Christmas card design, but ultimately the President and First Lady make the final choice.

This year’s card follows along with many past cards that featured  interior views of the White House while other cards feature exterior views.  Yet former Alaska governor and GOP vice presidential candidate Sarah Palin has found issues with the card stating it fails to accentuate “family, faith, and freedom.”

I think the naysayers would find something wrong with the card no matter what the design was.   There certainly were a number of comments made regarding the choices the Bush White House chose for the card during his administration.

Think about the Christmas card aisle at your favorite store.  There are boxes and boxes of the cards with each having a different design and focus.   Some are very religious, some are humorous, some have pastoral scenes, and then others follow the Santa theme.

At some point it comes down to a matter of personal taste and what you think is appropriate.
Posted by EHT at 9:18 PM

What about the card from the DNC that had a photo of the White House from 2009 with a UFO photoshopped into the sky over the White House? That is not as bland as the card of the dog by the fireplace, and interestingly enough, the DNC didn't seem to know about the UFO either, in spite of it going through an extensive approval process including Obama.