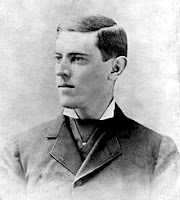 Following law school Woodrow Wilson spent a year in the city of Atlanta, Georgia to make his mark.   By the time he arrived the city already had 143 lawyers or 1 for every 270 citizens.   The law business was tough, and Wilson found he had a lot of time to kill.

To pass the time Wilson began to write a book.....Congressional Government in the United States....a book that eventually made him a little money and helped him gain entry to John Hopkins where he used the bit of writing as his doctoral thesis.

Along with Edward Ireland Renick, his friend and law partner, Wilson also passed the time by attending court as spectators.   Ray Stannard Baker, a Wilson friend and biographer advises Wilson began to get glimpses of the actual processes of the law in a city like Atlanta - the largest he had ever lived in.  He attended the local courts and the scales began to fall from his eyes.  He found two highly educated  and aristocratic young lawyers pouring forth floods of oratory over the case of a colored man caught stealing a hen.  He found a stew of pettifogging...meaning petty or trivial.... squabbles that seemed to him to be beneath the dignity of the court even to consider. He began to see how hard it was for starveling young lawyers to find even such "cases" as these.  For the best of them, it was no bed of roses; for the younger and poorer, what was there but starvation or a skulduggery of practice utterly repugnant for a high-minded man....

In September, 1882 Wilson's experienced what must have been one of the highlights of his Atlanta career.  The Tariff Commission was going about the country at the time taking evidence.  Its activities were being covered by young Walter Hines Page of the New York World.   Page was a friend of Renick's and visited the firm of Renick and Wilson often.   It's interesting to note that years later President Wilson would appoint Page as Ambassador to the Court of St. James.

After a year Wilson applied to John Hopkins and was accepted.    Renick left Atlanta for Washington D.C. and for a time it seemed it star rose higher than his friend Wilson's.

Renick obtained a government job in Washington D.C. and was soon sent to the American Embassy in Paris by President Benjamin Harrison.   Under President Cleveland he served as Assistant Secretary of State.

In an attempt to eek out some type of lesson from this stage of President Wilson's life we can assume that there is no such thing as down time or wasted time if we approach it properly, and........you never know which of your friends might be in a position later in life to assist you.

For more about President Wilson's time in Atlanta visit my blog, Georgia on My Mind......here.