I thought the Eisenhower Christmas cards were pretty neat with President Eisenhower doing a painting that was reproduced:

During his first Christmas in the White House in 1953, Eisenhower referred to Hallmark President Joyce C. Hall for assistance with his first official Christmas cards as the President of the U.S. An artist himself, Eisenhower painted a portrait of Abraham Lincoln while waiting for news on a Korean armistice. For inspiration, he used a photograph of Lincoln done by Alexander Gardner in 1863. Eisenhower ordered 1,100 white keepsake folders from Hallmark, each containing a reproduction of his Lincoln painting. All of the folders were embossed with the official Presidential Seal. Over 500 of the reproductions were given to White House staff members at the annual Christmas party. Each folder was accompanied by a gift enclosure Christmas card imprinted with the words “Season’s Greetings” in gold. 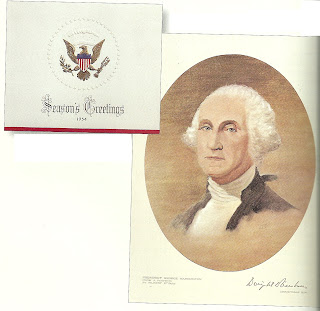 ...With the success and high demand of his Lincoln portrait, Eisenhower painted a portrait of George Washington to be given as a Christmas gift in 1954. He painted the portrait while on a fishing trip in Colorado, using the well-known painting by Gilbert Stuart as inspiration for his own work. Similar to the prior year, President Eisenhower had Hallmark reproduce 1,300 lithographs of his work, each accompanied by a folder embossed with the Presidential Seal. Eisenhower also ordered 1,300 gift enclosure Christmas cards from Hallmark to accompany each portrait reproduction. The enclosure cards were adorned with the Presidential Seal and contained the red bordered imprint, “Season’s Greetings 1954.” The President gifted the lithographs to over 650 White House staff members as well as select Cabinet members and Congressmen.

...Eisenhower continued his tradition of painting for his 1955 Christmas gifts, but instead of a portrait of a past President, he painted a landscape near Fraser, Colorado, where he frequently visited to go fishing. The painting was entitled St. Louis Creek, Byers Peak Ranch. However, in the midst of his work, Eisenhower suffered a heart attack and was rushed to Fitzsimmons Army Hospital in Denver. While recovering in his hospital bed, the President finished his painting so that it would be received by Hallmark for reproduction in time for Christmas.

Go check out the rest yourself at this fun site!