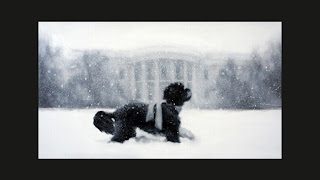 I realized yesterday that we hadn't done our usual White House Christmas card post (I don't normally do it, hence I didn't notice....excuses, excuses, right?), so I thought I'd do it  now.  This year's card was of Bo, as you can see above, and based on a painting done by Larassa Kabel.﻿ Here is some background from the artist:
The dog in the portrait is sporting a scarf, something Kabel says was an addition she made to the photo the White House sent out for her as part of the competition.

“They asked us to do an interpretation of the photo, and I did need to change a couple of things,” Kabel said. “Black animals are difficult to represent and have them read as three-dimensional.”
To make the snow look realistic, Kabel used a tool most people have inside their bathrooms: a toothbrush.
“It splatters so it looks like snow,” Kabel said.
The White House won’t be paying Kabel for her portrait of Bo (“I’m living on glory,” she said when asked about compensation), but she and her husband will attend the White House holiday party on Dec. 18.
She sees meeting the president and Mrs. Obama as a highlight of the trip, but she is also excited to do something many White House guests are familiar with: celebrity watch.
“I’ve never seen anyone famous, so I’m like, who will be at the party?” Kabel said. “I’m looking for anybody.”
Posted by Jennie W at 5:40 PM